Tutankamen tends to grab the spotlight. But there are other mummies with remarkable tales to tell. There is a boy disguised as a hawk and a priest with a baby in his coffin. A mummy called Alex has a cautionary tale for modern society while a Persian princess almost fooled the world (she was something else entirely). From the mysterious to the murderous, here are the top untold stories from the grave.

In 1679, Peder Winstrup was buried at Sweden’s Lund Cathedral. In life, he had been an important bishop. In death, his body remains one of the best-preserved corpses from the 17th century. When researchers decided to study the bishop more closely, they were surprised to find a baby tucked away behind his legs.

The practice of burying babies with adults was not uncommon for the era. But for a long time, the question begged—why was the infant placed with this particular bishop? All researchers knew was that the child was a boy and that he had been stillborn.

In 2021, DNA tests revealed the two shared 25 percent of their genes. After looking at Winstrup’s family records, it became clear that the boy was not his nephew, cousin or half-brother. The bishop had a son and while there was no trace of the son’s kids, a grandchild was the only option that Winstrup’s genealogy records had not eliminated. This family connection could explain why the pair were buried together. 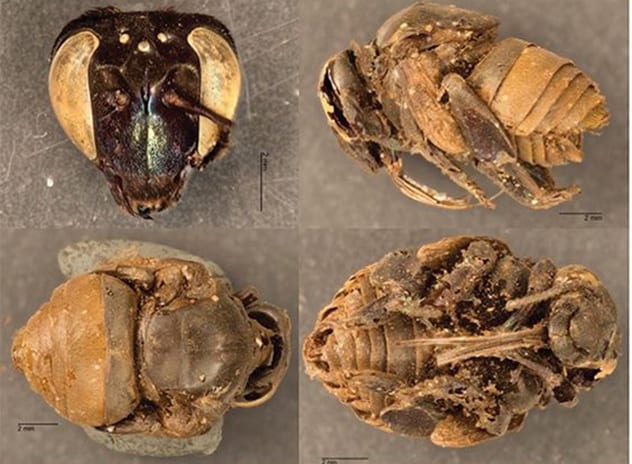 A unique discovery in Panama City started with a fire. In 1875, a blaze swept through the Catedral Basílica Santa María la Antigua. During the restoration process, the altarpiece was repaired with gold leaf. Unbeknownst to the people fitting the gold, they sealed in several bee nests.

After 150 years, another restoration team discovered the now-mummified nests. Incredibly, the bees were perfectly preserved. This was a rare opportunity for scientists to study a very shy species. Called Eufriesea surinamensis, the bees are known for their rainbow-like faces and females that live in incredibly well-hidden nests.

The bees also gathered enough pollen to show what the ecosystem looked like 150 years ago. The insects grazed on 48 different plants and flowers and interestingly, a tea mangrove that no longer grows near Panama City.

Around 2,200 years ago, a man died in ancient Egypt. His name did not survive but thanks to the inscriptions on his coffin, his job did. The mummy, which was nicknamed Alex, appeared to have been a priest.

The Israel Museum in Jerusalem scanned Alex and made a surprising discovery. The priest ate a lot of carbs, sat too much, and avoided going outside into the sunlight. A sedentary lifestyle is considered to be a modern problem but Alex proved that ancient people also acted like couch potatoes inside their homes.

His lifestyle cost him dearly. Alex developed heart disease and osteoporosis that was so severe that it shrunk his height down to 1.5 metres (5 feet). At the time of his death, Alex was roughly 30 to 40 years old, a young age for someone with high status in the ancient world. 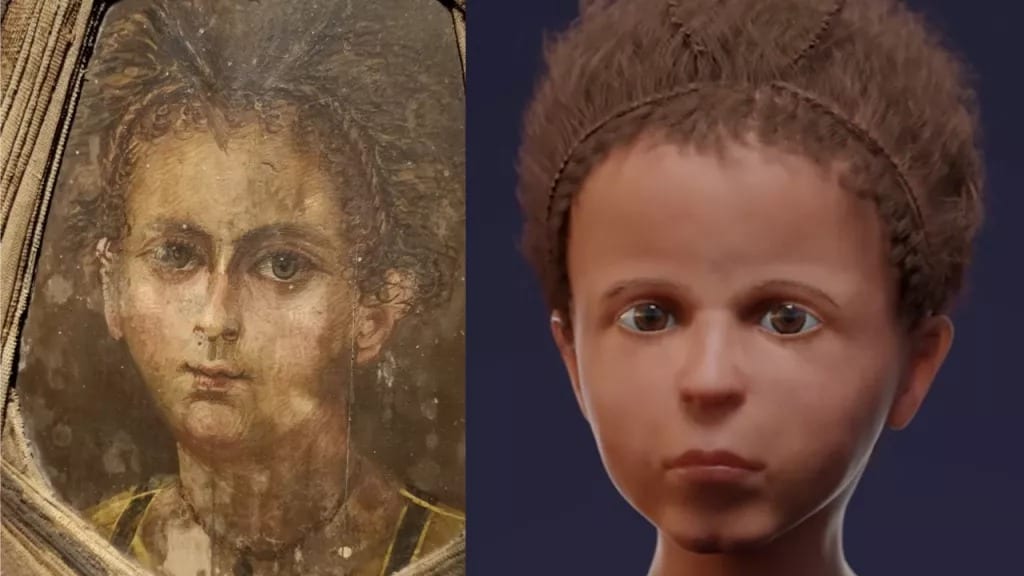 From the first to the third centuries AD, some Egyptians added a loving touch to mummies. After wrapping the body, they painted a portrait of the deceased on the outside (where the person’s head would be). Researchers always wondered if these portraits were accurate pictures of the dead or random art.

In 2020, one portrait mummy was chosen for facial reconstruction. The remains belonged to a boy who died when he was 3 or 4 years old, most likely of pneumonia. Software scanned his skull and digitally reconstructed his face. The kid was then compared to his portrait.

The digital boy and the portrait matched, except for one curious detail. For some reason, the artist made him look much older in the painting. Since this was the first reconstruction of a portrait mummy, it remains unknown whether this was common practice, a special request by the family or an artist taking creative liberties with the facts.

6 The Hawk That Was Something Else

In 2018, the Maidstone Museum in England scanned one of their human mummies. Afterwards, an impulsive decision changed everything about another mummy. The team thought that, while they were busy with the scanner, why not have a look at some of the museum’s mummified animals for the first time?

One of the critters they chose was a hawk. The museum always thought that the bird was once a treasured pet The body was carefully mummified and the casing was beautifully decorated with images of hawks. But when the mummy was scanned, the skeleton was not a bird’s. At first, the bones looked like a monkey’s but then the truth dawned. It was a malformed human baby.

The boy was anencephalic, a condition that probably killed him at birth. The brain was almost nonexistent. The child also lacked most of his skull and his spine never closed. He also had a cleft palate and lip.

In ancient Egypt, children were buried in pots. The boy’s burial broke with this tradition. He was clearly valued and treated with care. But it remains unclear why he was not given a normal pot burial which, for the time, was highly unusual. 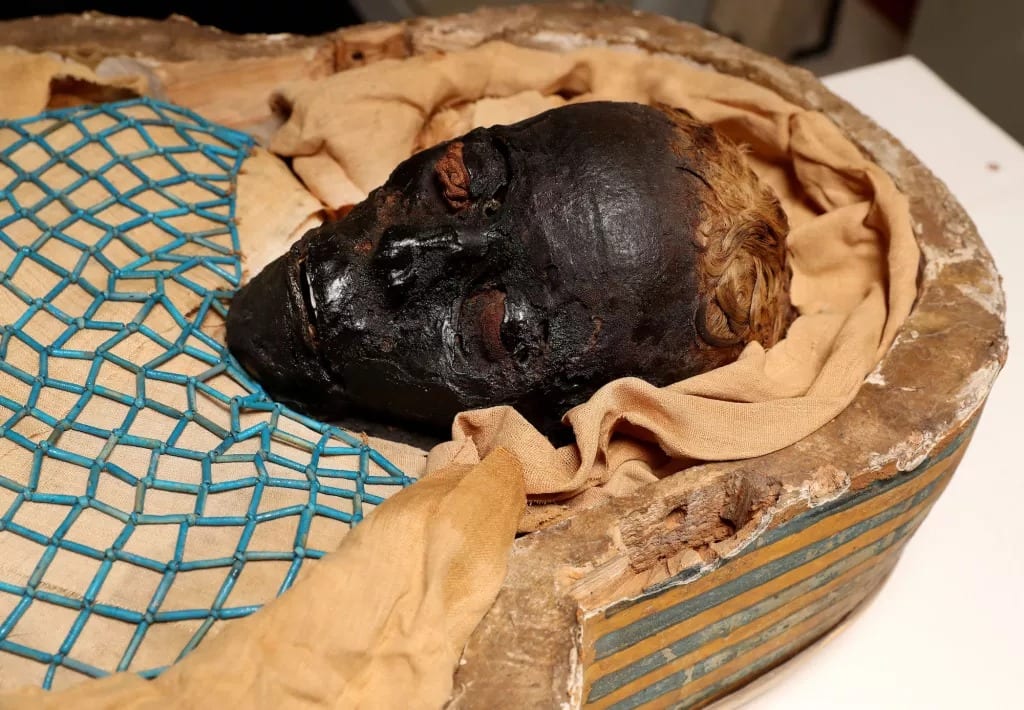 The first Egyptian mummy to reach Ireland was Takabuti. She arrived in 1834 and the hieroglyphics on the casket explained that Takabuti was the daughter of a priest. She was also married and in her 20s when she died around 660 BC. But the question remained. Why did she die so young?

In modern times, Takabuti was DNA tested and scanned. Both revealed surprises. The DNA tests showed that she was related more to Europeans than modern-day Egyptians. The scans solved how she died—Takabuti was attacked from behind and violently stabbed to death. Besides this tragic discovery, another unexpected find was that she had two rare conditions. Takabuti had an extra vertebrate and also an extra tooth.

4 More Clues About A Pharaoh’s Death 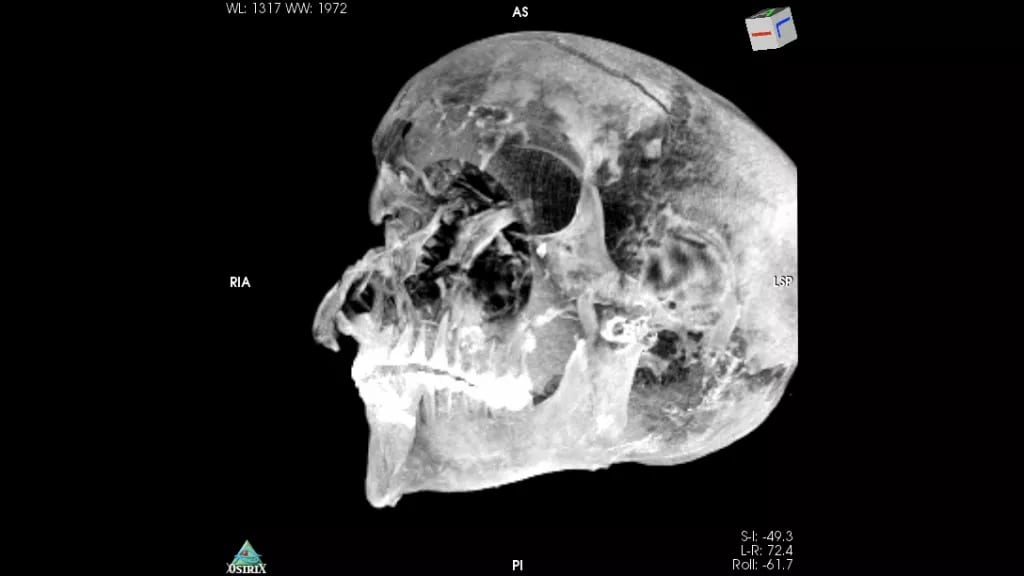 A lot is known about pharaoh Seqenenre Taa II. At the core of his reign was a deadly war with the Hyksos people who occupied Egypt. His son and heir died on the battlefield but nobody knew how the pharaoh himself died.

Seqenenre Taa II’s mummy was discovered in 1886. His skull had a terrible open wound across the forehead and the body also smelled terrible. This suggested that he killed during a deliberate attack and hastily embalmed.

In 2021, a new study found more injuries. Apart from the 7-centimetre (2.75 -inch) gash across his forehead, Seqenenre Taa II also suffered trauma to his nose, cheeks and above the right eye. The pharaoh had also been stabbed at the base of his neck. Since there were no defensive wounds on his arms, he might have been tied up. The angle of the wounds also showed that he was kneeling when he was surrounded and killed with weapons like axes, swords, and blunt objects.

The manner of his death suggested that Seqenenre Taa II was captured and executed on the battlefield. If so, then the “legends” of pharaohs fighting in the trenches with their soldiers was true in Seqenenre Taa II’s case. 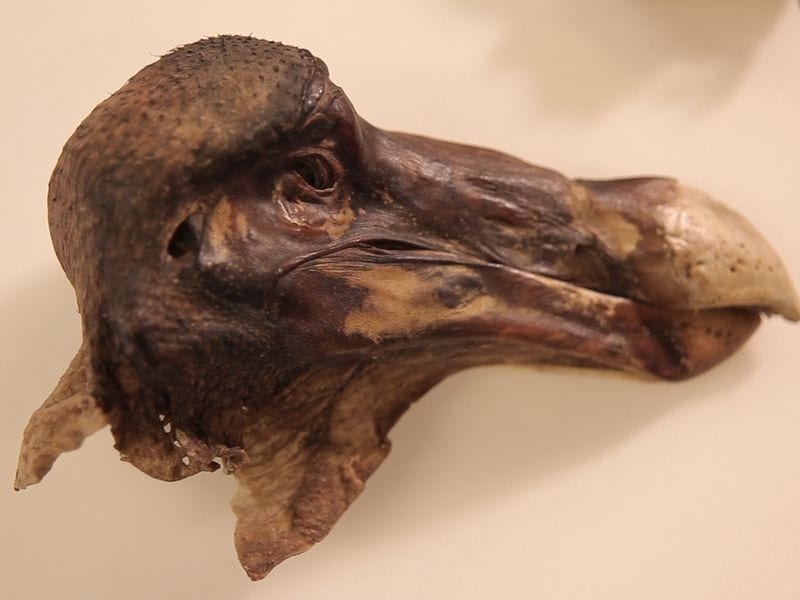 Oxford’s Natural Museum is home to a famous dodo. The bird is the only of its extinct species that still has soft tissue. Hoping to learn more about the dodo’s evolution, researchers scanned the bird’s mummified head—and found lead pellets lodged in the skull. The bird was waddling around during the 1600s when a hunter came up behind it and shot the dodo in the head.

Dodos were mercilessly hunted on their native Mauritius. For this reason, the discovery might not sound odd at all. But what made the shot so surprising was the supposed history of the Oxford specimen. According to an eye witness, the bird was living in London. It was kept as a popular curiosity so why shoot it?

Perhaps the eyewitness account was false and the bird was already dead when it arrived in Britain. But if the dodo was gunned down in Mauritius, that leaves another mystery. How was the carcass preserved for the long journey back to Britain when nobody had the skills to mummify it? 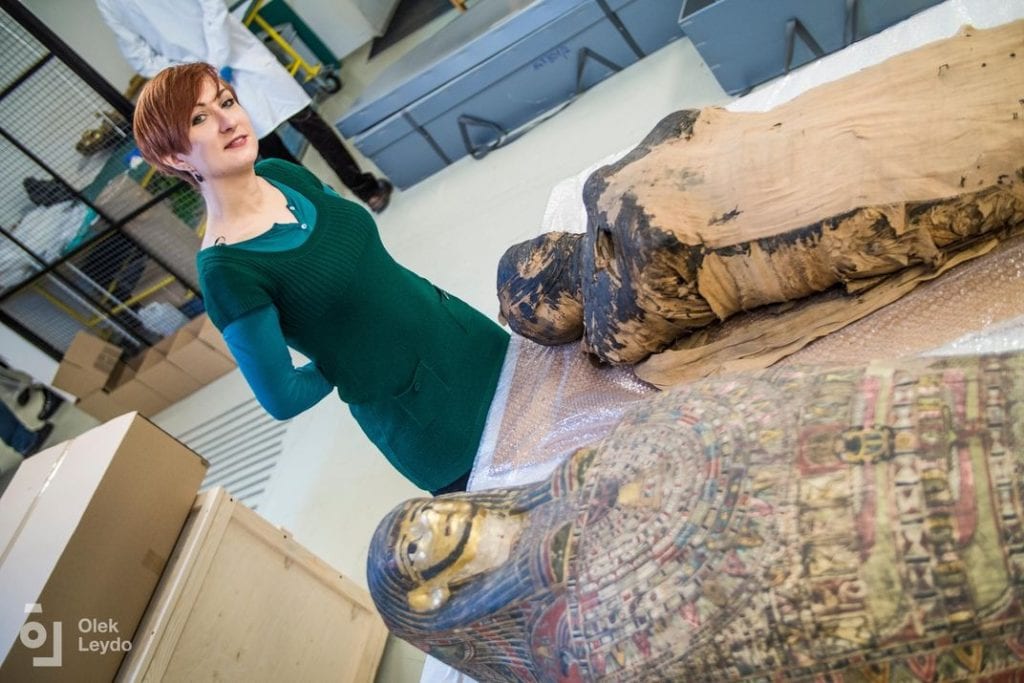 In the 19th century, the University of Warsaw welcomed a new Egyptian mummy. They were delighted to know that the individual was important. According to the writing on the elaborate coffin, it contained a priest called Hor-Djehuty.

But the “mummy trade” back in the day was riddled with dishonesty. Sellers often pulled a switcheroo. They would get a mummy—any mummy—and place it inside a coffin to sell. Recent scans and investigations have ousted many of these scams. In 2016, Hor-Djehuty’s remains were x-rayed and the University’s worst fears were confirmed. The body did not belong to the priest but an unknown woman.

Any disappointment quickly vanished when somebody noticed the baby. The scan showed that the woman was 6 or 7 months pregnant and for some inexplicable reason, the infant was not removed during mummification. Indeed, the woman remains the world’s only pregnant mummy. 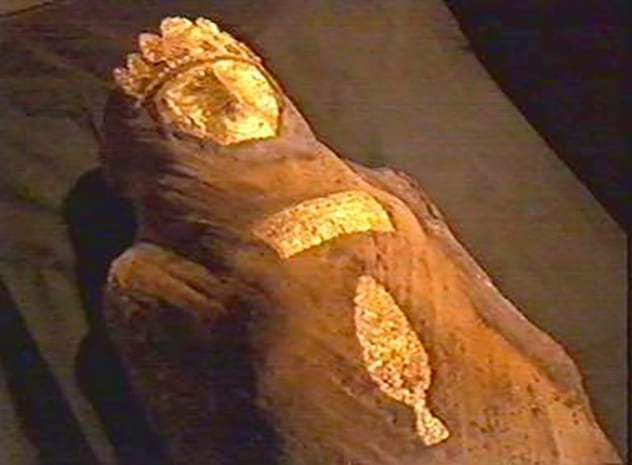 In the year 2000, Pakistani police nabbed several people who tried to sell a mummy. The confiscated artefact was sent to the National Museum in Karachi and soon, a news conference announced that the body belonged to a Persian princess who died about 600 BC. The find was so rare that Iran and Pakistan fought over which country owned the royal mummy.

Then the fairytale discovery started to fall apart. The writing on her breastplate, which revealed her name and family, had grammatical mistakes. Her name was also a red flag. She was referred to as Rhodugune, which was more Greek than Persian. The reed mat under the body was also just 50 years old.

Experts feared that it was another random ancient mummy adorned with fake royal stuff to fetch a higher price. The truth was more bizarre. The woman was not ancient. She died around 1996 from a broken neck. A blow from a blunt object had also fractured her spine.

There are a lot of unanswered questions. Who was she? What happened the day she died and who mummified her body?

Top 10 Iconic Places Pictured From Behind

Jana earns her beans as a freelance writer and author. She wrote one book on a dare and hundreds of articles. Jana loves hunting down bizarre facts of science, nature and the human mind.