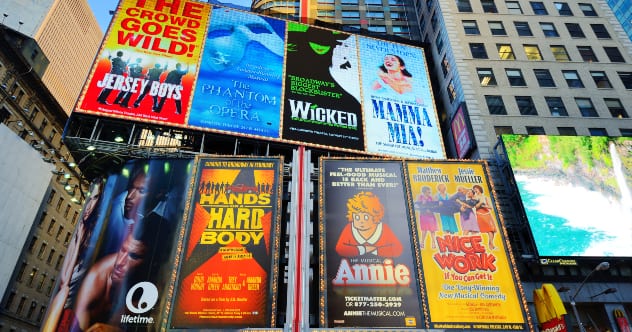 Fans of musical theatre know that every show is an opportunity to fall in love with incredible characters, get lost in thrilling tales, and witness great talent at work. For most of us, singing along to music in “The Producers,” “Les Miserables,” “Phantom of the Opera,” or even “Hamilton” is almost instinct at this point. But if we are being honest, it’s impossible to attend almost every show on Broadway, and some great productions can slip our attention. This list dives deep into the archives to present some Broadway gems that everyone should see at least once in their lifetime.

These are the top 10 Broadway Musicals you’ve never heard of before.

Dance is one of the body’s purest forms of expression, and “Contact” is a musical that taps into this magic. The musical has no original score or dialogue. Instead, it tells its tale through a modern ballet jukebox soundtrack. In the Broadway musical developed by Susan Stroman and John Weidman, the major theme is “contact,” or at least, the lack of it. The musical is arranged in three parts dubbed “Swinging,” “Did You Move,’ and “Contact” that tell stories through dance.

Contact was inspired by Stroman’s experiences on a night out where she met a captivating lady in a yellow dress. Whenever the lady stepped on the dance floor, she accepted a dance from a gentleman and became the center of attention. The unique inspiration gave birth to a musical that chooses dance as its language, and the result is impressive. Still, as a Broadway musical, “Contact” is too progressive, which is both a strength and weakness as far as theatre audiences are concerned. Either way, the musical was so good that it won the Tony Award in 2000 for Best Musical, a triumph that turned controversial since it had no live singing or an original score.

Can dreams come true on Broadway? Heck yes, they do—for people of all backgrounds, professions, and hobbies! In this case, “Hands on a Hardbody” is a Broadway show that focuses on the dreams of wannabe car owners. This Broadway musical features a cast of ten Texans who are cash-strapped but keen on winning a brand-new red Nissan truck. In the musical set in the scorching red sun, the contestants must battle the elements by keeping at least one hand on the truck. In the end, only one person can drive away with the car, and the test of perseverance drives the entire plot.

The incredible show is based on a 1994 documentary that covered an endurance competition in Longview, Texas. In the competition, 24 contestants battled to see who could keep their hands on a pickup truck for the longest time without leaning or squatting on it. In the Broadway version, the intriguing story gets a much-needed uplift by featuring Amanda Green’s (“Bring It On: The Musical”) score and Dough Wright’s (“I Am My Own Wife”) book.

“Extra, extra, read all about it!” Newspaper headlines capture the hottest news in any city and Disney’s “Newsies” highlights the experiences of newspaper boys. The story follows a group of orphaned newsboys in Lower Manhattan who find themselves at odds with newspaper boss Joseph Pulitzer. The plot escalates after the publisher increases the cost of his paper. His decision incites a strike that literally “makes the headlines.”

“Newsies” is closely based on the “Newsboys Strike of 1899” of New York that influenced dramatic changes in the compensation of child laborers. This Broadway musical enhances the story further, featuring music by Alan Menken and lyrics from Jack Felden. Now considered one of Disney’s best musicals on Broadway, the musical was filmed, released in theatres, and is now available for streaming.

Romantic narratives are a staple on Broadway, and “The Bridges of Madison County” taps into this theme with a twist. The show starts on a simple note, introducing Francesca, an Iowan housewife who’s dedicated to her family but still feels dispassionate about her reality. In a tale of forbidden love, Francesca crosses paths with Robert, a hunky National Geographic who takes her back to her maiden days. In an affair that lasts four days, the two go on an emotional rollercoaster that leaves audiences swooning and tense. After watching the show, you can’t help but wonder, “What will Francesca do after Robert leaves? What if?”

“The Bridges of Madison” is based on a novel by Robert James Waller, but the adaptation by Marsha Norman transforms it into an exciting selection. Jason Robert Brown’s musical arrangement is so captivating that it earned him the 2014 Tony Award for Best Score. As far as musicals go, this underrated musical punches all the necessary buttons, from a powerful story to heartbreaking romance.

“American Idiot,” the musical, highlights the struggles of ordinary people in a post-9/11 world. It follows three men from a less-than-exciting hometown. With a score by Green Day—which you may have already heard if you are a Green Day fan—the musical narrates how Michael, Tunney, and Johnny make unique choices in search of happiness. Michael becomes a family man, Johnny turns to drugs, and Tunny joins the army and ships abroad.

“American Idiot” was developed as an expansion of the stories from Green Day’s punk rock album of the same name. For the musical, the band also helped compose the music with lyrics by Billie Joe. Billie Joe collaborated with Michael Mayer to write the musical’s book. Yet, despite connections to Green Day, the musical and its important themes are heavily overlooked.

The success of any Broadway theatrical production relies on multiple factors, and the release date determines how appealing a show is to audiences. “Assassins,” which premiered on Broadway in 2004, was released too soon after the September 9/11 attacks. Because of the musical’s political themes, it didn’t go over well. However, that says nothing of the remarkable quality of the show.

As the unambiguous name suggests, “Assassins” features people who historically tried or successfully assassinated American presidents. The cast features names like John Hinckley, Lynette “Squeaky” Froome, and John Wilkes booth among others. Together, these figures narrate their justifications for offing presidents while chanting “Everybody’s Got the Right…”

The original concept for the musical was developed by Charles Gilbert, with the musical score created by Stephen Sondheim. Given the sensitive theme, Sondheim and others in the production anticipated backlash from the public but remained adamantly unapologetic. While the musical earned some awards, including five Tony Awards, its mixed and negative reviews affected its popularity.

The best musicals are revived over and over. One of those musicals is “Finian’s Rainbow,” which has been revived on Broadway an impressive four times over. The musical centers on the adventures of Finian, an elderly fellow that travels to Southern America in a quest to hide a pot of gold. Hot on Finian’s trail is the gold’s original owner, Ogg, a leprechaun in danger of turning human without his precious possession. The tale gets even wackier when a corrupt US Senator learns about the gold and also seeks to possess it.

“Finian’s Rainbow” was developed from a book by E.Y. Harburg and Fred Saidy, with music from Burton Lane. While the film version is more popular, the musical version is a masterpiece that has been nominated every year it was produced and revived on Broadway. But despite the quality that makes it worthy of the Broadway stage and its revivals, “Finian’s Rainbow” is widely unrecognized. It’s a shame that “Finian’s Rainbow” is less popular among theatre lovers because everyone deserves to see its story.

Chess is a common allegory for strategy and warfare. In the Broadway musical titled “Chess,” these literary and theatrical devices emerge. The musical centers on a chess tournament between American and Russian grandmasters. The two, equally capable players battle it out for one woman. Of course, the “chess game” represents the manipulations that characterized the Cold War ideologies by the Americans and Russians.

A distinctive aspect that makes “Chess” a lesser-known musical in the US is its alterations before it hit Broadway. In London’s West End theatres, the show was popular after it opened in 1984 as it attracted audiences for three years straight. It even features music by Murray Head—Judas in the original British cast recording of Andrew Lloyd Weber’s “Jesus Christ Superstar”—”One Night in Bangkok” hitting the mainstream charts. But when the musical was revised for Broadway in the US with Richard Nelson’s book, its fortunes differed as it lasted only two months. Despite the slump in the US, “Chess” remains one of the most underrated, and best, musicals ever.

In the world of musicals, “Wonderful Town” is a hidden gem that deserves a poster on every street of New York. The musical, which first went on Broadway in 1953, focuses on the life of two sisters living in New York’s Greenwich Village. Ruth and Eileen Sherwood aspire to make it big in the city, but things don’t pan out as they planned. In some moments, the sisters find themselves home-sick, remembering their simple life back home in sweet “Ohio.” “Why, oh, why, oh, did I ever leave Ohio?”

With a strong book by Joseph A. Fields and Jerome Chodorov and music from Leonard Bernstein, “Wonderful Town” elucidates a great love for New York. The musical qualifies as a must-see as its story is founded in comedy and music for every mood.

“Little Me” is a Broadway musical that takes an alternative route based on its loose, autobiographical structure. Based on a novel by Patrick Dennis titled Little Me: The Intimate Memoirs of that Great Star Stage, Screen, and Television/Belle Poitrine, the musical is endlessly energetic and hilarious. Divided into three main acts, the novel traces Belle Poitrine’s story as she writes her memoir alongside author Patrick Dennis. Belle pens her ups and downs in the musical, including her comical relationships, marriages, and rise to fame and fortune.

After its initial Broadway production, “Little Me” was revived two more times. While it attracts little mention among the great musicals of our time, “Little Me” is a refreshing stab at the mundane concerns that dominate our experiences in an unpredictable world.