The 1940s through to the 1960s saw nuclear attacks and tests that revealed the terrifying power of these devices. The World War II bombing of Hiroshima is famous but few realize what it did to the pilots of Enola Gay or that Australia was hit by a bomb twice as big. At the bizarre end of things, meet the guy who got nuked twice and the scientists who bombed beer and then drank it.

The world’s first test happened in the state of New Mexico on 16 July 1945. The blast created a new mineral called trinitite which looked like green glass. There was nothing mysterious about it. The glass formed when the explosion fused desert sand, asphalt, the test tower and its copper wires together.

But decades later, something was discovered inside the glass that rocked the scientific world. Called a quasicrystal, they were believed to be impossible. All crystals have atoms arranged in an orderly or disorderly fashion. A crystal with “in-between” traits could not exist but in 1984, they were acknowledged in theory and called quasicrystals.

Quasicrystals were eventually discovered in meteorites and they were also created in the laboratory. None had ever been found elsewhere on Earth but as researchers learnt that quasicrystals formed under extreme temperature, shock, and pressure, they realized that atomic blasts provided these conditions.

When the quasicrystal was discovered inside the glass, the surprise came with a mystery. The grain had 20 sides and an internal structure that was impossible in other crystals and so complex that nobody can explain how it formed.

The Nevada desert saw nuclear tests for decades. One project, called Operation Teapot, tried to answer an unusual question—can you drink beer that survived a nuclear attack? In 1955, bottles of soda and beer were arranged at a test site. Some were placed near ground zero, barely 322 meters (1,056 feet) away. Other bottles were placed a few miles off.

Operation Teapot detonated 14 nuclear bombs. Only 2 were used to test the drinks but they were powerful blasts equal to 20 and 30 kilotons of TNT. Once the dust settled, researchers moved in. The bravest took a sip of the beer, claiming that the brew tasted good except for the bottles closest to the explosion. Luckily for them, further tests showed that the beverages were only slightly radioactive and safe to drink.

In 2017, a teacher gave his students an assignment. He wanted to prove the lesson he was teaching—that fallout from nuclear tests of the 1950s and 1960s remained in the environment. Each student had to bring food to the class that came from a local garden or market. As predicted, various samples contained faint traces of caesium-137, a radioactive isotope found in fallout.

But one bottle of honey was 100 times hotter than everything else. Surprised by the jar’s high levels of caesium-137, a team collected 122 samples of raw and unfiltered honey from different beekeepers and markets in the eastern US. Around 68 samples contained the radioactive isotope.

But why is honey so hot? Plants absorb the isotope from the earth and store it in nectar. It becomes more concentrated when bees turn the nectar into honey. According to researchers, honey-lovers have nothing to worry about. The radioactivity levels are considered as safe.

7 The Glass Beaches Of Hiroshima 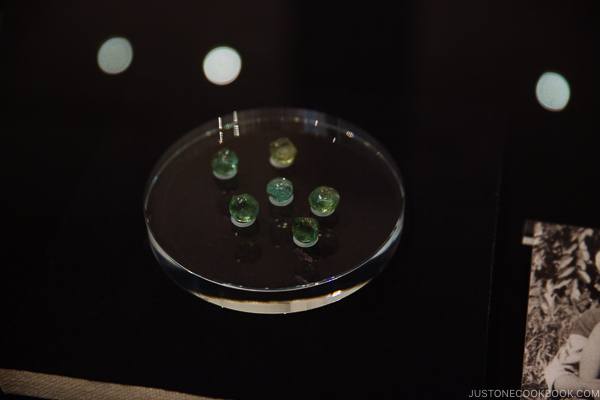 In 2015, a geologist named Mario Wannier was sorting through sand samples. They were collected from Hiroshima Port to determine whether the marine ecosystems of the Moto Ujina Peninsula was healthy or not.

But then Wannier found something odd—tiny glass spheres. Some had a melted appearance or were fused together. Others had tails. The most bizarre beads had a rubber-like composition. All told, up to 2.5 percent per kilogram scooped from beaches as far away as 12 kilometres (7.4 miles) consisted of glass.

When the bomb dropped, the materials of Hiroshima rose into the air with the fireball. The rubble melted and formed glass inside the atomic cloud where the spheres cooled and rained back down on Earth.

In 1979, a satellite called Vela-5B was in orbit. It was part of a series of satellites designed to detect unauthorized nuclear detonations around the world. On September 22nd, Vela-5B recorded a blast.

The explosion happened in the air near the Prince Edward Islands, which is located in the southern Indian Ocean. Experts agreed that the event had all the signs of a nuclear bomb, including a double flash and an atmospheric wave. If this was a bomb, it would have been a 3 kiloton explosion (the Hiroshima bomb was a 15 kiloton event).

However, surveillance aircraft found nothing and no radioactive fallout was ever detected. Some suggest that the satellite was struck by something that made it give a false reading. However, highly experienced professionals, including researchers at Los Alamos, remain convinced that it was a nuclear test.

So who performed the sneaky test? The leading theory is that South Africa and Israel performed a joint test. Other suspects include France, India, and Pakistan. But nobody is admitting anything.

Between 1956 and 1963, seven atomic bombs exploded at Maralinga, in Australia. The remote area was chosen by the British who detonated the devices as part of a Cold War project. One of the bombs was twice as big as the one that had destroyed Hiroshima but that was not the only disturbing fact about these tests.

Australia’s prime minister at the time, Robert Menzies, allowed the tests without taking the matter to cabinet first. There were also crazy smaller tests where plutonium was set on fire or blown up with TNT. The fallout reached Townsville, Brisbane, Sydney and Adelaide. Servicemen were exposed to the tests and 30 percent would eventually die of cancer. Many suspect that this was no accident and that the scientists wanted to study the effects of nuclear blasts on humans.

When nuclear weapons became a thing, the Soviets wanted to prove to the world that they still had the technology and the power to be reckoned with. The result was the Tsar Bomba (meaning the Tsar’s Bomb). This enormous device was 8 meters ( 26 feet) long and weighed 27 tonnes (29 tons).

In 1961, the decision was made to test the bomb in a remote area called Novaya Zemlya. The Tsar Bomba was so powerful that the plane’s crew had a 50 percent chance of dying in the blast. Even so, they flew to the test site and dropped the bomb. What followed was horrifying.

The plane barely made it. Even though the crew was already 50 kilometres (30 miles) away, the detonation almost destroyed the plane. The mushroom cloud soared upwards and grew a cap that measured 100 kilometres (63 miles) wide. A village 55 kilometres (34 miles) away was completely destroyed and for hundreds of miles more, homes were severely damaged.

The Tsar Bomba released unthinkable power. The blast’s energy, which was 1,500 stronger than the Hiroshima event, circled the Earth three times. The most frightening fact? The bomb was originally twice as powerful. However, the designers feared that the fallout would also affect the USSR so they toned it down.

Koko Kondo was eight months old when the world’s first atomic bomb detonated above Hiroshima. The house collapsed on her but Koko’s mother, who was also at home, fought through the rubble and freed them.

As Koko grew up, she saw the mutilated victims and buildings. After learning that a single US B-29 bomber was responsible, the girl swore revenge on the plane’s crew.

In 1955, when Koko was 10, she and her family were invited to America to share their experience on a TV show. The studio had an explosive surprise. To Koko’s shock, the host introduced them to the pilot of the Enola Gay. It was Captain Robert Lewis who had famously looked back at Hiroshima after the bombing and written in the plane’s logbook, “My God, what have we done?”

Koko wanted to attack Lewis. But then she noticed the tears in his eyes and something amazing happened. Instead of kicking him, the little girl walked up to Lewis and held his hand. After Lewis passed away in 1983, Koko regretted never having thanked him because the meeting replaced her hatred with forgiveness and the realization that war caused suffering on both sides.

2 The Other Pilot Turned To Crime

Whereas Captain Robert Lewis was the co-pilot of the Enola Gay, Major Claude Eatherly played a more direct role in the bombings of Hiroshima and Nagasaki. He flew another plane, a weather aircraft, to assess the city’s visibility. The decision to drop the devices hinged solely on Eatherly’s decision. He found that visibility was good and gave the go-ahead.

Eatherly was shocked by the devastation that followed. Realizing what he had done, the Major became plagued by nightmares of the bombings. He bounced between psychiatric institutions and spent years being arrested for petty crimes. Eatherly also robbed grocery stores at gunpoint but according to the authorities, he was really bad at it. After being caught, he was released by a jury who believed that the bombings had driven him insane.

But Eatherly was just deeply traumatized. He turned his life around (as best he could) and became famous as an anti-nuclear activist. Eatherly died young, aged 59, from cancer. But before he did, he identified himself to the people of Hiroshima as the man who gave the go-ahead that day and that he regretted his decision. Similar to Koko’s reaction to Captain Lewis, 30 bomb victims wrote to Eatherly and said, “You are also a victim of war like us.”

1 This Guy Got Nuked Twice

On August 6, 1945, Tsutomu Yamaguchi was looking forward to going home. The 29-year-old lived in Nagasaki but was spending the last day of a business trip in Hiroshima. He was walking near a shipyard when he saw the Enola Gay drop the bomb. He hid in a ditch but he was too close to ground zero. The shock wave sucked him into the air and seared his skin.

Badly burnt, Yamaguchi tried to get back to his family in Nagasaki. At one point, to reach the train station, he had to wade through a river filled with bodies. The train arrived in Nagasaki where his own mother did not recognize him due to the burns.

On August 9, Yamaguchi was at work trying to convince his boss that a single bomb had taken out Hiroshima. His superior told him that he was insane. Ironically, it was roughly at that moment when Nagasaki was nuked. This blast tore through the office, ripped off his bandages and severely radiated Yamaguchi.

Although Yamaguchi suffered from terrible radiation sickness, he recovered and lived to be 93. Around 165 people reportedly experienced both attacks but Yamaguchi was the only one recognized by the Japanese government. He received the unique title of “nijyuu hibakusha,” meaning “twice-bombed person.”

10 Reasons Why A Nuclear War Could Be Good For Everyone

Jana earns her beans as a freelance writer and author. She wrote one book on a dare and hundreds of articles. Jana loves hunting down bizarre facts of science, nature and the human mind.