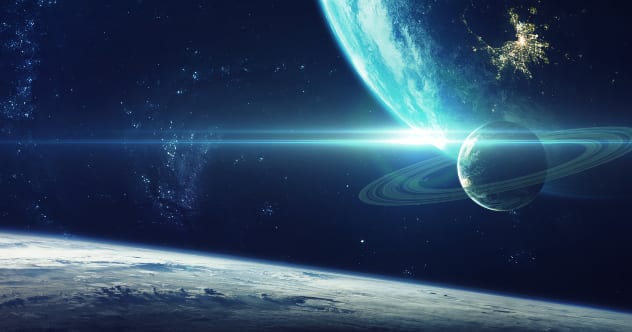 Sci-fi horror is a burgeoning movie and TV genre that, in a sense, is a testament to humanity’s fear of the unknown. And yet, like Manifest Destiny that drove American settlers westward, the compulsion to explore it burns strong in modern society. Some byproducts in our race to space have bettered our lives: take baby formula or smartphone cameras (though unfortunately, unlike popular belief, Velcro and Tang were not, in fact, created by NASA). But the more we learn what’s out there, the more true horrors emerge to justify our existential dread. Take, for instance, the following 10 Frightening Facts About Our Solar System that will forever change your perception of where we live and how our tiny little blue planet has made it this far.

10 Space Dinosaurs On The Moon

There hasn’t been a crewed landing on the moon since 1972. So what the heck is actually up there? Luckily, we have technology like NASA’s Lunar Impact Monitoring telescope and NASA’s Lunar Reconnaissance Orbiter. The Orbiter has been circling the moon and sending back measurements since 2009. And part of what scientists found was actual dinosaur bones sent off Earth from the meteors that led to their downfall.

The moon has no atmosphere to create wind to erode them, and thus they remain in perfect condition. Who knows what discoveries to help complete our fossil record remain there, tantalizingly out of reach. And with how surprising it was to find dead dinosaurs on the moon, let’s not rule out living ones…

9 Pluto isn’t a Planet, But if it Was

We’re sorry if this is where you hear the final verdict on the infamous debate: Pluto is and always has been a dwarf planet. We’re also sorry that the American Education System has failed you because there’s a lot more in our Solar System than just eight planets and one dwarf planet. There are four more officially classified dwarf planets in our Solar System: Ceres, Haumea, Makemake, and Eris, and they have always been there.

We’ve known about Ceres since the 1800s! Makemake even has its own moon, while Haumea has two! Additionally, there are dwarf planet candidates. Possibly as many as 200 in the Kuiper belt and over 10,000 in the region beyond. Scientists believe that some larger moons like Neptune’s Triton are dwarf planets caught in the planet’s orbit. If we don’t even hear about dwarf planets, what else aren’t they teaching us?

One of the most important features to shape our planet, literally, is our ever-shifting tectonic plates. This process began about 3.3 to 3.5 billion years ago and gave rise to mountains, islands, volcanoes, sea vents, etc. It is one of a multitude of reasons life on Earth exists at all. The rest of our solar system seems pretty stagnant: we’ve got our rocky planets between the Sun and us and some big swirling gas giants behind us, big whoop.

Well, it wasn’t until 2016 that data from the Mercury Surface, Space Environment, Geochemistry and Ranging (MESSENGER) spacecraft revealed that innocuous little Mercury is shrinking, thanks to these same tectonic processes. Meaning, it hasn’t finished forming in the 4.6 billion years since the formation of our Solar System. Our little bubble of space as we know it today is merely a snapshot; don’t get too comfortable in the false assumption that everything will remain the same forever. If we just found out that Mercury was shrinking, imagine someday finding out the Earth is, too.

Every kid dreams of becoming an astronaut. That is before the reality of adulthood crushes our dreams and forces us into a 9-5 office job to pay off student loans. But thanks to a beautiful duet between NASA and social media, we have a closer look into the lives of our fine spacemen and women more than ever before. And they’re happy to share. Some things like tears in space and floating through their cabins seem truly whimsical. However, the majority of adapting to zero gravity is difficult at best and debilitating at worst (especially returning to Earth after a long mission). This all brings us to their feet.

They’re not using them much. We know that much. Without the friction of walking, running, and other activities, the skin on the bottom of their feet softens and sloughs off. In order to conserve space for packing, they’ll wear the same socks multiple days in a row, too. And if they aren’t careful with removal, dead foot skin goes flying everywhere, creating macabre chaos of free-floating skin strips.

6 Space isn’t As Far Away As it May Seem

We’re not talking about how close we are technologically to commercial space travel. Instead, we’re talking about how little atmosphere there truly is between the Earth we walk on and where space begins, known as the Kármán Line. If you could get in your car and drive vertically at 60 mph, you would be in space in just an hour and change.

That’s right, that’s only 62 miles away from where you’re standing right now. Imagine that being your morning commute. The current record holder for highest space jump is Felix Baumgartner, sponsored by Red Bull (stellar marketing, honestly), and GoPro, who took a stratospheric balloon 24 miles high and jumped. The trip up only took him 90 minutes. And thanks to our good friend gravity, his free fall before deploying parachutes was only 3 minutes and 48 seconds.

As romantic as gazing into the night sky is, real astronomy actually takes a lot of math (which is frightening enough on its own). Many discoveries are made by crunching the numbers, calculating away until an anomaly pops up, and scientists have to figure out why. At the outermost edge of our Solar System exists one such anomaly.

Astronomers Konstantin Batygin and Mike Brown from Caltech announced in 2015 the theoretical “Planet Nine” as an explanation for the movements of some objects in the Kuiper Belt cocooning our Solar System. Planet Nine was originally thought to be a Neptune-sized planet with an orbit around the Sun taking 15,000 earth years. In 2019 a new theory emerged: Planet Nine may actually be a primordial black hole. It is thought these phenomena formed at the beginning of the universe when extra dense pockets of material collapsed in on themselves. This one has possibly been captured by our Sun’s gravity and although it’s calculated to be quite tiny (only 3.5 inches across), it is still mighty. And even worse, mighty close.

Anyone who has survived a major hurricane can attest to how truly powerful this kind of storm system can be. And yet, the worst ever seen on Earth is child’s play compared to the gas giant Jupiter’s Great Red Spot. Around two to three whole Earths can fit inside the storm, which has been documented by astronomers for over 300 years. Its winds blow up to 270 mph on average but around its oval-shaped edges can get up to 425 mph (keep in mind, the strongest winds detected on Earth have only been recorded over 200 mph a handful of times).

It also eats smaller vortices upon impact. In 2000, it engulfed three smaller storms and then, unbelievably, turned a deeper, bloodier red. Another example is Saturn’s raging six-sided storm nicknamed “the hexagon,” which has also been spinning for possibly hundreds of years. We don’t know why it has taken this shape or lasted this long. What we do know is that when travel between planets is available, we wouldn’t want to get anywhere near one of those!

Turns out, there’s little to actually love on Venus. We can’t think of what would be a worse death: being crushed by intense atmospheric pressure or incinerated by blazing temperatures. Good thing that with Venus we don’t have to decide. Both happen instantaneously upon entering Venus’s atmosphere. Temperatures average around 860 degrees Fahrenheit and it rains sulfuric acid.

What’s scary about this death planet is taking a good long look and seeing it as the potential warning it is: Venus got where it is thanks to a runaway greenhouse effect. Sound familiar? Venus may have been in habitable condition for around 3 billion years, until 700 to 750 million years ago. Problems like the polar caps melting on Earth seem like an easy fix compared to Venus’s seas having boiled away entirely.

2 The Solar System is Over the Hill

Life: you’re born, you grow, you age, and then you die. These are simple facts. The fleeting nature of our existence, some say, makes it beautiful. But we’re not the only ones with this blessing and curse. Our universe is theoretically 13.77 billion years old, plus or minus 40 million years. Scientists estimate that our Solar System is about 4.6 billion years old. And scientists think we’ve only got about another 5 billion years left in our little corner of space. That’s it.

To our knowledge, it’s taken this much time to develop intelligent life. Humans might not get a second chance at developing sentience should we die out. But should our descendants carry on so long, they better find a new home, because the end is near…

1 And When We Go, We’ll be Eaten by Our Own Sun

The Sun, benevolent light and energy giver, will be the deliverer of our demise. Once it runs out of the hydrogen necessary for nuclear fusion, its core will shrink, while conversely, it will begin to shed its outer layers, becoming a bloated carcass of its former self.

This growth will extend so far as to completely envelop our Earth. And before that, the heat and radiation cast off will roast everything on Earth entirely. It will even cremate everything in the entire Solar System. Only then will the Sun cool into a White Dwarf and cast light no longer. The once vibrant Solar System will become a cold, quiet, dead place. Like most everywhere in the universe.