There are a couple of major life events that you want to get right. You want high school prom to be a teenage dream, you want graduation from college to be a groundbreaking moment, and you want your marriage ceremony to go off without a hitch. If you skip to the end of your “perfect moments in life” timeline, and we get to funerals. Of course, it’s a funeral.

You want everything to go smoothly. People are in mourning, and this isn’t a time for slip-ups. How we wish the world worked that way. Here are the top ten funerals that went horribly wrong.

10 That’s Not the Right Video

Back in 2016, Simon Lewis, 33, and his newborn son, also named Simon, died in a car accident in Cardiff, Wales.

Simon’s wife was still pregnant at the time of the collision (she was in the passenger seat) and expressed concern that something was wrong with Simon Jr. She was rushed to the hospital, where doctors performed a c-section. The baby didn’t survive.

For four whole minutes, the funeral assembly sat through uncensored pornography while funeral home staff figured out how to turn it off. The Reverand at the ceremony said, “I remember looking up at the screen and seeing some type of video come on and a very loud noise.” What kind of noise was it, Rev?

Needless to say, people were livid. Funeral directors could not figure out how the video switch happened and launched an official investigation. The best explanation the funeral home could offer was that the screen, a new Smart tv screen, was accidentally connected to a pornography broadcast.

Julie Mott was 25 years old when she passed away from cystic fibrosis in 2015. A week after she passed, which would’ve been her 26th birthday, family and friends held a memorial service for her at Mission Park North in San Antonio, Texas. The memorial was a beautiful tribute to a vibrant young woman. Staff transported her casket to a holding room, where she was to be cremated the next day.

Except that never happened.

When the staff came to retrieve the casket and body the next morning, they discovered both were missing. With no evidence of a forced entry, people were left dumbfounded and incredibly angry — and I don’t blame them.

There were two prime suspects in the case, one being Mott’s ex-boyfriend, Bill Willburn. Willburn was, well, obsessed with Mott. And he suspiciously lingered about ten to fifteen minutes after the memorial service ended and everyone left.

Now, because of the nature of the “burglary,” investigators concluded that the body had been taken in the three hours between the end of the memorial service and when Mission Park North closed. Either suspect could be the one investigators were looking for. But neither Willburn nor Beyer and Beitel were charged with the crime.

8 Somewhere Over the Rainbow…

Judy Garland, whom we know as Dorothy in “The Wizard of Oz” and Esther Smith in “Meet Me in St. Louis,” died of a drug overdose in 1969. The country mourned her death as she had been since she hit the Silver Screen, a cinematic icon. She was also and still is a gay icon.

There’s a lot of cultural analysis that goes into why we see her as such. Still, the general explanation — which tends to be a bit reductionist — is that Garland understood suffering and that suffering was entirely relatable to the majority of the gay population. Again, reductionist but popular. The full explanation is an entirely different article.

So what does this have to do with a funeral?

Coincidence or not, some historians, history buffs, and Judy Garland fanatics associate the famous New York City Stonewall Riots with Garland’s death. They say that the sorrow and mourning people felt triggered the response against the police that led to the rioting and kicked off the LGBTQAI+ movement.

Or it could’ve been that the gay community in NYC had enough of being discriminated against and abused by society.

Whatever the case, she died five days before the riots began, and ultimately, what went horribly wrong, started something terribly right.

We’ve all been threatened with the consequences of plagiarism: you can lose your job, automatically have a failing grade, or even be suspended from school. And honestly, it’s a crappy way to navigate through life. But I guess if you’re a murderer, anything is on the table — even intellectual thievery.

In 2015 in Johannesburg, South Africa, Christopher Panayioutou not only murdered his wife but also delivered a beautiful, touching eulogy — that was plagiarized. Of course, no one knew that he was a murderer at that point.

But once he was arrested, the truth of his deeds came to light. Panayioutou had lifted his eulogy from the tribute of another woman by the name of Jennifer Atkins. Atkins, no relation to the diet, had passed five years prior. 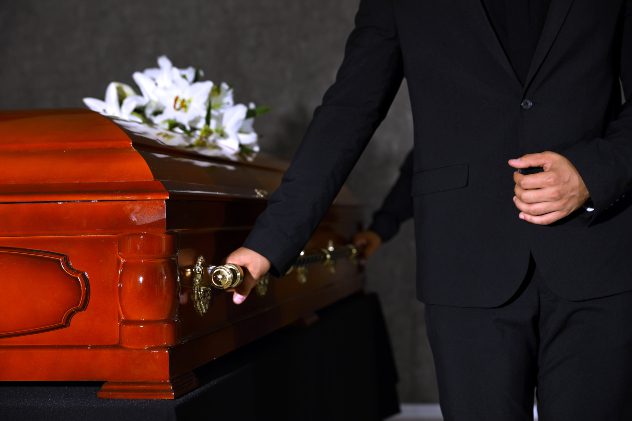 In 2021, Los Angeles resident Tina Morales buried her father, a respected patriarch of her family. Unfortunately, the bottom of the casket gave out during the funeral proceedings. As we expected there might be, Morales filed a lawsuit.

The lawsuit explains that they had expected a casket that would be reliable and sturdy and that the family expected Universal Caskets (the manufacturer) to handle her father’s body with care. That did not happen as he, well, fell out.

The owner of Universal Caskets, Ariel Suarez, claimed that he knew nothing of the case and did not sell the casket to Morales. In fact, he blamed the possibility of a weight limit problem as the cause of the mishap. Regardless, Morales was understandably shaken up by the incident and it was not a respectful way to go into the grave.

You’ve probably seen this video already, and it’s actually one of the lighter things to happen at a funeral on this list — even though what happens still totally stinks.

In what was supposed to be a symbolic dove releasing ceremony to represent the freedom of the soul after death, funeral-goers witness one of those doves getting hit by a massive truck.

In the video, you can hear the funeral goers’ audible “oh!” as the truck drives by, hitting and instantly killed the bird. The ceremony is followed by an awkward silence and people looking at each other in disbelief.

4 Drinking on the Job

In 2017, family and friends pulled up to the burial site for 33-year-old Christina Gilbert. When they arrived, they noticed that the grave attendants were still digging the grave. Even worse, there were beer bottle caps strewn about the plot.

Family and friends kicked the attendant out — mostly because he was drinking on the job — and finished digging the grave. They had wanted a simple burial for Gilbert, but instead, the incident turned the burial more morbid and frustrating than anything. Christina’s sister, Heidi Lawson, is visibly upset in the news report, noting how terrible it is to “watch your sister’s coffin sit there… it’s not right.”

They were finally able to bury Christina hours later.

A traditional burial in China took a turn for the worse when the casket fell down a steep mountainside. The casket then crashed into several people below. Three people suffered minor to moderate injuries.

Why was the casket going up the mountainside in the first place, you ask?

According to Feng Shui practitioner Zhen Yi, graves in rural areas are chosen with Feng Shui in mind. The mountain just so happened to be a perfect site. Chinese culture also emphasizes respect for the deceased. So the coffin falling down the mountain was a very serious incident. To be fair, the coffin falling was not the fault of the funeral workers on-site. One of the pully ropes snapped.

As Hamlet did with Ophelia, so did countless heartbroken and sorrowful mourners jump into the graves of their deceased loved ones. This is not an uncommon occurrence. And it tends to spark humorous remarks. But believe me, for the people who did it, they weren’t in it for the laughs.

The difference with this jumping into the grave case is that it wasn’t just one person who decided to dive, but three. In Nakuru, Kenya, the wife and two of the deceased’s cousins jumped into the grave while the preacher was still giving his sermon.

Edwin, the deceased, was tragically murdered on December 3. Edwin’s body was discovered on a farm next to the suspected killer’s house the next day. The family was torn as to whether or not they should send the remains back to the morgue for further investigation into his murder. And I mean really torn.

The video depicts absolute chaos, raw emotion, and protests. At one point, the coffin is already in the grave, and people are trying to pull it back out.

A wake is a chance for people to say their final goodbyes to the deceased, and, if you are like I was at my grandfather’s wake, a chance to make sure that the deceased is not actually alive. Oh, was that a nostril moving? No, okay.

It does happen, though. People are wrongly declared dead and then “come back to life” at the funeral home, no resuscitation efforts or anything. We know this as Lazarus syndrome. However, this usually happens while the body is still in the morgue, not in the coffin at a wake.

In 2014, a three-year-old Filipino girl was declared medically dead after suffering three days of high fever. But she woke up in her casket during her wake! The doctor who was present confirmed that she was still alive. She was able to go home with the parents that day, but sadly, the little girl passed not too long after.