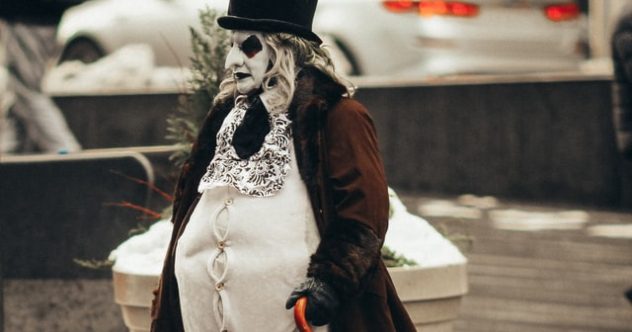 Movies fail when they create villains with thin or nonexistent motivations and justifications. Bad guys who are just bad for the sake of badness tend to suck the drama and tension right out of stories. But there’s a problem on the reverse side, too; sometimes villains are created a little too sympathetic and reasonable, and it makes us question whether or not the so-called heroes should have actually won. Some villains make us question the lines we draw between good and evil, right and wrong, in our modern, nuanced society. The list is dedicated to ten of those villains, characters who make us wish we could see them win.

10 The EPA from Ghostbusters

Yeah, that’s right: Ghostbusters‘ (non-spectral) villains are the freaking Environmental Protection Agency. We’re meant to dislike them just because they want to regulate the Ghostbusters and because their mouthpiece inspector, Walter Peck, is kind of a turd. Turd though he might be, he was 100% right the entire time.

Peck’s introduction is simply asking the ‘Busters to see their hazardous waste storage, something well within his purview and frankly, very necessary. His concern is that the proton packs and ghosts containment units might be dangerous and need proper safety measures in place. That’s it, that’s his big crime: concern for public safety. And it turns out he was right. As Egon says about the containment unit, “turning it off would be like dropping a bomb on the city,” and as he says about the proton packs, “Don’t cross the streams… It would be bad… Try to imagine all life as you know it stopping instantaneously and every molecule in your body exploding at the speed of light.” Later, they purposefully cross the streams. Regulation, please!

Heavyweights, probably the most underrated movie of all time, is a story about a bunch of overweight children sent to a camp to lose weight, get healthy, and build better habits. The villain in the movie is the camp leader and fitness guru Tony Perkis. The movie reveals his true evil when he quickly begins forcing the overweight campers to eat better and exercise. Wait, did I write that wrong?

It’s true. Perkis is vilified just for doing his job. Not only that but doing a job that could literally save these children’s lives. And yes, Perkis has a breakdown at the end of the film that paints him in an awful light, but only after these sadistic brats torture him for months. They imprison him in a shed, starve him, and insult him mercilessly, even electrocuting him when he tries to escape. His rage is justified, especially since he was kidnapped, humiliated, and tortured just—and it’s worth repeating—for helping overweight kids become healthy.

8 Ultron from Avengers: Age of Ultron

Okay, no one will make the point that Ultron was a good guy, and possibly not even a guy at all. His goal was to exterminate most or all the human race, forcing the few possible survivors to evolve fitter and stronger or just replacing them with copies of himself. Not exactly heroic, but if Ultron had won, the imminent war for the Infinity Stones would have gone very differently.

If Ultron had won, his factory systems would quickly have replaced humanity with vibranium-enclosed hyper-intelligent battlebots, forming a society around an ultra-efficient hive mind dedicated to strength and survivability. Not only that, but he would quickly collect all the Infinity Stones on Earth at the time: the Mind Stone, Time Stone, and Space Stone. When Thanos inevitably came calling, the time, space, and mind-controlling Ultron and his army of millions of war-bots would have given the Mad Titan the fight of his butt-chinned life.

The tangible, external villains in Jurassic Park were all dinosaurs—the velociraptors, T-Rex, and even the dilophosaurus—but the true, internal villain was hubris. It’s all Jeff Goldblum can talk about the whole movie; over-confident humans like John Hammond try to control what they shouldn’t. Except that they can. And do. Repeatedly.

Various dinosaur parks operate successfully for years throughout the franchise, bringing a whole new world of entertainment and scientific advancement. It’s Hammond’s dream—the parks are all biologists’ wet dreams—and the parks’ value to genetics is unparalleled. The dream only breaks when shady people ruin the plan. Without the human hemorrhoid that is Dennis Nedry, Hammond’s dream would have endured, and Hammond should have won. The world might actually be a better place with his technology and parks. Every scientific leap is hubristic, but I bet you’re glad we dared to battle chaos and invent the airplane, the telephone, and the science to live past 30.

6 The Replicants from Blade Runner

Blade Runner is a titan in the genres of science fiction and cyberpunk. The movie is gorgeously shot and scored, exceptionally atmospheric, and also a literal story about a slave-catcher hunting runaway slaves and executing them. I’ll repeat it: literally.

Replicants in Blade Runner are androids so advanced that they can pass for “real” humans, even to the point of being made from biological (i.e., human) material. They are as smart as humans, feel genuine emotion, and are repeatedly tested and found to be as real as anyone else. Yet they’re almost exclusively used for slave labor. If ever one of the slaves tries to escape and, you know, exercise their innate right to freedom, special slave-catchers named Blade Runners find them and put bullets in their heads. The crazy part is that we’re meant to sympathize with the slave-catchers and slave-masters, just because they’re ever-so-slightly less different than us. You can’t even say the whole plot aged poorly because I’m pretty sure slavery was a bit of a no-no by 1982.

Michael B. Jordan’s Erik Killmonger was ruthless, murderous, and conniving. He was also empathetic, righteous, and selfless, and he should have won.

Killmonger planned to claim the throne of Wakanda by using his royal blood and ritual combat, i.e., exactly the way you’re supposed to do it. Then he meant to end Wakanda’s longstanding isolationist policies and share their advanced technology and medicine with less fortunate people across the world, especially descendants of African slaves who have been generationally disadvantaged. That sounds less like an evil villain and more like a global hero. Ultimately, his biggest crimes were his violent tactics and selfish need for hegemony. But if the end result is a massive technological leap for the entire world (one about to be invaded by aliens) and the almost complete end to systemic disparity, as well as disease and hunger, we can forgive him.

4 The White Walkers from Game of Thrones

Again, we can’t say the White Walkers are innocent. They kill loads of people throughout the show. But then again, so do the humans. And unlike the humans, the White Walkers immediately revive their slain, even granting them semi-immortality in exchange. The Walkers also don’t seem to in-fight. Ever. Unlike the petty, selfish, dishonest, underhanded humans who view life as a “game,” the White Walkers seem to live in perfect harmony with each other.

It’s worth asking, then: which society is better? And who should have won the war? Now we’re as human as you are (you assume), so we also tend to side with humanity in interspecies conflicts. But the humans of Westeros and Essos suck. They’re terrible people and murder each other in droves, sometimes for fun and sometimes for no reason at all. On the other hand, the White Walkers only kill to establish species dominance, at which point they’ll presumably just lay back in their ice-chairs, sip their blue slushies, and soak in the Winter sun.

3 Gollum from Lord of the Rings

This isn’t one of those “he was right” entries. Instead, like Ultron, a triumph for the evil Gollum would be mean a larger triumph for the greater good of the world—as well as saving tens of thousands of lives.

Gollum held the ring for almost 500 years and… nothing. No Sauron, no war. Then Bilbo steals his ring, which begins a whole chain of events that causes the entire War of the Ring. Gollum travels around Middle Earth searching for the ring, gets captured in Mordor, and reveals Bilbo’s supposed location. The Nazgul are set loose, Frodo must journey to Bree and then Rivendell, and the Fellowship is formed to destroy the ring in Mount Doom. Alternately, if Gollum had won the ring back at any of his various opportunities, it would have stayed hidden in a dark cave underneath a mountain, far north of Mordor, as hidden from Sauron and the Nazgul as it had always been. Then Sean Bean might have survived a movie or three.

2 The Director from Cabin in the Woods

The Cabin in the Woods is an excellent spoof of the horror genre. It stars a group of teens who vacation at an isolated cabin and are soon beset by all sorts of ghouls, ghosties, creepies, and crawlies. We eventually learn that a global, inter-government agency known as the Facility is pulling the strings, purposefully torturing and killing the teens as part of a ritual sacrifice to appease a pantheon of cruel ancient gods. In other words, the villains are saving the world.

The movie ends with two of the teens disrupting the Facility’s operations and nullifying the ritual, which should be a good thing. That means, after all, that our heroes survive and defeat their persecutors. Except that the Facility wasn’t kidding around; without regular human sacrifices, an ancient god quickly emerges and destroys the entire world. It’s pretty hard to argue against killing five teens to save eight billion people and all their future descendants.

1 Everyone but the X-Men From X-Men

The X-Men are the coolest superheroes on the planet. They’re a badass team of sexy superheroes in leather with all sorts of fun powers, jets, and motorcycles. They’re also a bunch of unregulated, uncounted, unknown nuclear bombs walking the planet and blending in with a mortal human society. Every single X-Men villain was correct: they’re too powerful to be left alone.

Senator Kelley, who we’re meant to hate, continually brings up valid points against mutant existence. If you can walk through walls, what’s to stop you from robbing a bank? If you can control minds, what’s to stop you from forcing someone to launch a nuclear missile? Charles Xavier can murder people with a thought, Magneto can rip the metal out from your blood and bones, and Cyclops shoots lasers out of his eyes—constantly. The worst part is that they, and most mutants, awakened to their powers at puberty. Imagine a twelve-year-old with the power to freeze your blood, control lightning, or rewrite reality (all real X-Men powers). The world would constantly be on fire, both literally and metaphorically, until we deal with the mutant problem.